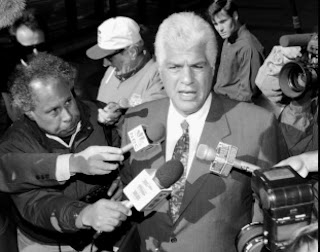 Richie Phillips, who helped organize NBA referees and headed the union for Major League Baseball umpires for more than two decades died on Friday. He was 72.

The Philadelphia Inquirer, which first reported his death, said the cause was cardiac arrest.
Phillips, an attorney from Philadelphia, formed NBA referees into a negotiating group in 1976 and helped them win better pay and working conditions.

In 1978 he began a run of more than 20 years as executive director of the Major League Umpires Association, where he helped them make gains in wages and benefits several times until a bargaining strategy in 1999 failed and caused membership to flee the union.

Phillips encouraged umpires to resign in the final month of the 1999 season, but the move backfired when 42 of the 50 umpires who followed his advice had their resignations accepted and were replaced by minor league umps. There were 20 who gained reinstatement but 22 never did and the umpires en masse left Phillips and the MLUA and formed the World Umpires Association.

Hard-driving negotiating tactics were part and parcel for Phillips-led organizations.
The NBA referees won their first improvements in 1976 when they threatened a strike before the playoffs. The baseball umpires had several work stoppages including a seven-week strike in 1979 and a walkout at the start of the 1984 postseason.

Under Phillips, the umpires got pensions and better salaries. The salary of a rookie umpire was $17,500 when he started and at least $95,000 in 2000, after he’d left.
“We got so much because of Richie – pensions, vacations, better salaries,” former ump Don Denkinger told the Associated Press. “He had his feet on the ground and knew what he wanted. He’d keep talking until 6 a.m. if that’s what it took.”