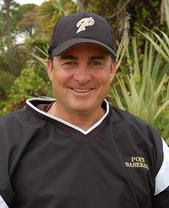 When an assistant baseball coach at Pope John Paul II High in Boca Raton fell ill last winter, the school didn't have to look far to find a qualified temp.

Coaching at first base for a few games was one of the school's biggest boosters - Major League Baseball umpire Ed Rapuano.

"I put the Pope John uniform on for a couple of games. My wife got a chuckle out of it,' Rapuano said this week before working a game in Detroit.

During his 20 years umpiring in the big leagues, Rapuano has heard more than an earful from angry players and managers. He once threw Philadelphia's Shane Victorino out of a game - for arguing balls and strikes from his position in center field.

But Rapuano laughed and said he never thought about taking advantage of his rare role reversal to spew any venom at the high school umps.

"I tried to disguise myself a little bit and wear sunglasses, but they all knew who I was,' he said. "Those guys do a heck of a job and they were all really great.'

Rapuano, 52, has lived in Boca Raton for 20 years, since his earliest days as an umpire in the Florida State League. Although his job keeps him on the road most days during baseball season, he has kept his allegiances close to home.

"We've had alumni involved, too, but our biggest driving force up to now has been Eddie Rapuano,' said Athletic Director Scott Baker.

The school is still working on construction estimates and a time table, but Rapuano said it's important to raise money now in hopes that the new fields will attract more students.

"We're on the ground floor, but it's moving along,' he said.

He raised $7,000 by raffling off a ball autographed by the Yankees. He also hosted a wine-tasting charity with Greg Norton, the school's softball coach.

"He has been first-class all the way,' baseball coach Pete Graffeo said. "He will do anything he can to help the program. At first, I thought he was too good to be true.'

Rapuano has a vested interest in Pope John Paul II. His three kids went to school there - Eddie (24) and Rosalie (20) graduated and 17-year-old Nick is entering his senior year.

The school recently hired former Dolphins running back and Notre Dame star Autry Denson as its new football coach. Rapuano said the next step is to build the baseball fields.

"The Catholic schools are low on attendance with the economy the way it is. Athletics is a good way to bring kids to the school,' Rapuano said. "Since my name has been out there, we've been getting a lot of nibbles on the hook. Hopefully we get more kids to apply.'

Rapuano said he's convinced that baseball fields at the school will boost team pride, pointing out how the players respond when they work out in batting cages on the school grounds.

"I noticed the difference in the kids' attitudes when they are on their complex, when they're at the school with the football and lacrosse teams at the other end of the field and soccer team playing on the football field and their school in the background. You can see how much better they respond when they're actually in their own backyard,' he said.

Posted by Major League Umpires at 11:15 PM No comments: