Sure, the San Francisco Giants' surge to a two-game advantage over the Tigers as the series turns to Detroit is a contributing factor, though one reason for baseball blandness this late in the 2012 postseason has been repeated by broadcasters Joe Buck and Tim McCarver several times, albeit in a very covert way.
This umpiring crew has been on point.
As said by Buck during Game 2 on Thursday, the 2012 World Series umpiring crew has called all close plays correctly, securing an accuracy of 100 percent through the championship round's initial set by the Bay.
Before the World Series began, umpire Brian O'Nora told his native Austintown, Ohio's WYTV that, "[Officiating is] the only job that you have to get everything right, you have to be perfect and get better." 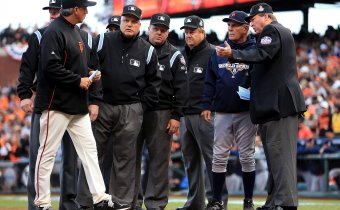 The 2012 World Series umpiring crew meet with managers Jim Leyland and Bruce Bochy prior to Game 1.
Doug Pensinger/Getty Images
As if putting this theory immediately into practice, O'Nora's crew for this year's Fall Classic has been exactly perfect—yet managed to improve from Game 1 to Game 2.
Using similar criteria employed by ESPN during their 2010 study, which found that umpires, on average, miss one out of every five non-balls/strikes close calls—a study that similarly found only 1.3 calls per game were, on average, considered "close" enough to merit video review, prompting extrapolation of the data to conclude that, of all calls that come their way, umpires are 99.545 percent accurate—Game 1 of the 2012 World Series contained two close calls, while Game 2 housed four.
Let's review them.

Yes, the umpires have been perfect through the first two games of this 2012 World Series; Tigers manager Jim Leyland even praised Iassogna for calling his player out at home plate during his Game 2 post-game press conference.
Yet by the same token, some fans and the media covering baseball have felt a collective knot, a yearning for one more source of controversy. 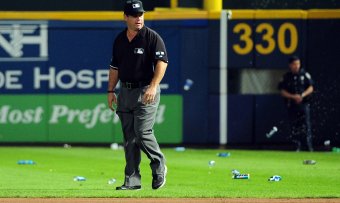 After Holbrook's correctly invoked infield fly ruling, Braves fans threw debris on the field in protest. Pictured above is right field umpire Rob Drake.
Scott Cunningham/Getty Images
When Sam Holbrook called an infield fly during the inaugural NL Wild Card Game—though the call was correct—the mere possibility that an umpire's gaffe had cost the Atlanta Braves a chance to advance in the postseason quickly became front page fodder for that most familiar of gripes and qualms: expanding instant replay in MLB.
MLB Commissioner Bud Selig has stated that in 2013 professional baseball will expand instant replay to include traps and fair/foul calls.
How about machines to determine intent vis-à-vis check swings and throwing at batters, too?
How about a polygraph?
Seizing on a trend, all umpire calls during the 2012 postseason have grown subject to enhanced scrutiny—a benign incorrect call by Jim Joyce quickly generated syndicated headlines, while Joe Girardi's ejection following an incorrect call at second base led to a rash of new articles with very familiar motifs, as did a tag attempt during the St. Louis Cardinals-Giants NLCS.
So during Game 2 of the World Series, when Buck praised the umpires for a job well done, ESPN editor/writer and former Baseball Prospectus editor Christina Kahrlcouldn't help but respond: "It's like they're just daring Cowboy Joe West to get involved somehow, no?"
Well, no.
In 2007, the Hardball Times comprehensively reviewed MLB umpire strike zones, with author Jonathan Hale concluding that, of all umpires, Country Joe "had the fewest number of extra balls and strikes, which is a sign of consistency." For that reason, West received Hale's "top vote."
Evidently, given his 2012 World Series assignment, West also received MLB's "top vote."
Dating back to 2006—and again in 2011—West has found himself on both sides of a players' poll, having been voted one of the best umpires in baseball while simultaneously being named one of the worst in both years' surveys. Sounds like a Joe West strike zone is needed to establish some semblance of consistency. 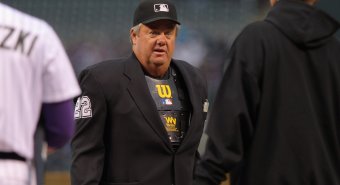 Umpire Joe West has paradoxically been ranked as one of the best—and one of the worst—umpires in Major League Baseball.
Doug Pensinger/Getty Images
As subjective as they may be, however, the polls' paradoxical dichotomy establishes the grand conflict of sports officiating: "All fans complain about officials. All fans believe the officials hate their team and have it out for them. This despite zero evidence supporting that belief."
So, for the time being, praise them. Offer up your respect while you still can.
Because that extremely misleading one-in-five close call statistic will come into play soon enough—the umpires are on a six-close call correctness streak.
They're overdue.
And after all, isn't that what we all want: more justification for an expanded instant replay system we have absolutely no idea how to logistically and fairly implement?