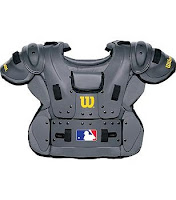 One of two protectors endorsed by Major League Baseball for use by its umpires. The other is listed above. This protector has the most armor and is the hottest selling protector for both the Minor League umpires and the collegiate ranks.
Posted by Major League Umpires at 12:23 AM No comments:

BALTIMORE -- The day was gray, but the cause was good.

Major League umpire Chris Guccione and a supporting cast of caring runners participated in the 2009 Baltimore Run for Bears on Saturday, an endeavor that raised $26,000 for the UMPS CARE Charities initiative. The program is designed to help fund visits and Build-A-Bear Workshops to children's hospitals around the country.

"It's very important to me. Not only do I love to run, but I also have a chance to give back to children and put a smile on their faces," said Guccione. "I'm in position to do that, and I was thrilled to fly out here and take some of my time to give back. My wife, Amy, also came out for the trip, and she ran the first leg of the team marathon."

Umpires have visited 41 hospitals in the three years of the program and expect to visit 12 more during the 2010 season. Samuel Dearth, the executive director of the UMPS CARE Charities, said the big league umpires choose the programs they benefit and they also do most of the fundraising.

"The good part about it is they get to put the money to use," he said. "The Baltimore Run for Bears specifically raises money for the children's hospital program. The umpires visit children's hospitals all across the country during the baseball season and provide Build-A-Bear Workshop experiences for kids with cancer and other serious illnesses."

"It's a brief visit," added Guccione, "and it gives children that are in pain a little moment to smile. They get to pick from three or four stuffed animals and they get to pick out the outfits to dress them in. It's just 10 minutes that you spend with a child, but it's 10 minutes where they can forget about everything else in the world. And that's what's important. And then they have a toy they can give to anybody, or they can keep it as a souvenir."

Guccione, who raised more than $2,000 with his wife, flew in from Denver to participate in the event. And it was extra special for him, because he had visited hospitals in Baltimore and Fairfax, Va., over the last two seasons. Guccione, an avid outdoorsman, said the program enabled him to do something he loves for a cause he supports.

"I came out here and I treated it as a workout," he said of his 7.4-mile jaunt. "But I flew halfway across the country to do it. It wasn't that grueling of a run, but I did push myself a little more today because I was trying to beat a personal goal of mine. I wanted to do it in under an hour, which I did, so I'm happy with that."

Several runners joined the fund-raising effort, and they had a choice to run in a team relay, a 5K, a half-marathon or the full marathon. The course started right outside Camden Yards and wound through the Inner Harbor and parts of Fells Point. Guccione, who runs five miles a day five times a week, said the charity helps keep life in perspective.

"Sometimes you worry about the travel or whatever," he said, "and then you think back and say, 'Is it really that tough compared to this small child that's got leukemia?' It brings you back down to earth."

Posted by Major League Umpires at 7:45 PM No comments: