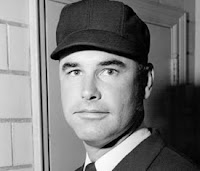 Harold Douglas Harvey (born March 13, 1930, in South Gate, California) is a former umpire in Major League Baseball, who worked in the National League from 1962 through 1992. Noted for his authoritative command of baseball rules, he earned the tongue in cheek nickname "God" from players, and was among the last major league umpires who never attended an umpiring school. His career total of 4,673 games[1] ranked third in major league history at his retirement, and he is only the ninth umpire to be inducted into the Hall of Fame.[1] In 1999 the Society for American Baseball Research ranked Harvey as the second-greatest umpire in history, behind only Bill Klem. In 2007, Referee magazine selected him as one of the 52 most influential figures in the history of sports officiating.

Harvey began officiating local basketball games at the high school level at age 16, later umpiring softball and baseball. He attended San Diego State College in 1955-56, where he played baseball and football, afterward returning to umpiring in the minor leagues while also officiating college basketball and football games. He remained a resident of San Diego throughout his umpiring career. He umpired in the California League from 1958 to 1960, and in the Pacific Coast League in 1961. He married Joy Ann Glascock on September 24, 1960, and the couple had two sons, Scott and Todd. Upon reaching the majors on April 10,1962, his greatest influences were umpires Al Barlick, Jocko Conlan and Shag Crawford, each of whom gave him invaluable advice in developing his skills – Barlick for his renowned mastery of the rules, Conlan for helping him appreciate the fun of umpiring, and Crawford for his tremendous work ethic. He was easily recognizable due to his thick white hair, which had already gone completely gray when he was in his 30s, leading to the early nickname of "Silver," and in 1971 he grew a handlebar mustache, at a time when no major league field personnel had worn facial hair since the 1940s; he kept it trimmed to the edges of his mouth, and he wore it for one season. In the latter part of his career, Harvey became known for appearing in the "You Make the Call" segments on the televised Game of the Week. In 1974, the Players Association conducted polls of players in both leagues to identify and rank the best umpires (the New York Mets did not participate); Harvey was named the top NL umpire, being the only official in the league rated as "excellent." In 1987, a Sports Illustrated poll of NL catchers ranked him as the third best umpire in the league for calling balls and strikes, with one voter saying he "still cares about doing the best possible job." In 1990, Sport magazine named him the best umpire in the game, citing his unbending application of the rules and noting his campaign to enforce the balk rule two seasons earlier, when he said, "Give me 10 high school pitchers, let me spend a week with them, and I'll show you 10 pitchers who won't balk. It's not that difficult. So they better learn it." Harvey's goal of umpiring until age 65 ended on October 4,1992, at age 62, when knee problems necessitated his retirement. He nonetheless became the first NL umpire since Bill Klem to work for more than 30 years, finishing with 31 years in the major leagues; his 4,673 games then ranked third in major league history behind Klem (5,374) and Tommy Connolly (4,769).

Among the notable games in which Harvey worked was the final game of the 1972 season in which Roberto Clemente collected his 3,000th (and last) base hit off of the New York Mets' Jon Matlack. He was the home plate umpire on September 10, 1963, when brothers Jesus, Matty and Felipe Alou batted consecutively for the San Francisco Giants, and also on June 3, 1987, when the Houston Astros and Chicago Cubs hit a combined three grand slams at Wrigley Field.

Harvey regarded his greatest contribution to baseball as being the introduction of a new sense of timing to umpiring; he noted that when he arrived in the major leagues, the emphasis was on making calls quickly and decisively, and said, "Everything was called too quickly. I've got a photograph of Jocko Conlan working first base. Jocko's arm was extended in the out call. But the runner was still short of the bag, and the ball was still in flight. In those days it was common to anticipate the call." Harvey, however, changed attitudes by insisting that it was better to delay the call and make sure it was correct.

In August 1997, Harvey was diagnosed with oral cancer, which was attributed to his longtime use of chewing tobacco. He has since become active in speaking to ballplayers and students about the dangers of tobacco use. He no longer uses the product that caused him to develop oral cancer.

In both 2003 and 2007, Harvey was the leading candidate for the Baseball Hall of Fame in voting by Hall members on the Veterans Committee composite ballot for managers, umpires and executives; however, his totals of 48 and 52 votes in the two elections fell short of the 60 and 62 necessary for election. Under new rules established by the Hall in 2007, he was again eligible for election in 2008, but fell one vote short of the required 12 votes. On July 25, 2010, he was finally inducted into the Baseball Hall of Fame. On December 7, 2009, Harvey was elected to the National Baseball Hall of Fame by the Hall of Fame Veterans' Committee and was inducted on July 25, 2010.
Posted by Major League Umpires at 10:01 PM No comments: