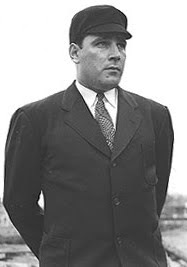 Born in Springfield, Illinois, Barlick served in the Coast Guard during World War II. With his wife Jenny he had two daughters, Marlene and Kathleen.
In a career where he umpired from 1940 to 1971 he'll go down in history as former National League Umpire, Tom Gorman said, "the best I ever saw." His hiring was endorsed by the first ever Hall of Fame Umpire, Bill Klem. At one stage in his career he became so infuriated by National League President, Warren Giles decision not to suspend a player that he quit and went home. Giles begged him to return. He actually worked with Klem and taught umpiring to everyone that would listen. In 1962 he was crew chief of the crew that opened Dodger Stadium. The crew included "Shag" Crawford, Ed Vargo, and newly inducted Hall of Famer (class of 2010) Doug Harvey. All three became deciples of the man they affectionatly called "Moose." Barlick umpired in seven All-Star games (1942, 1949, 1952, 1955, first 1959 game, 1966 and 1970), tying the record held by Bill Summers, and called balls and strikes for the first half of the 1949 through 1966 games and all of the 1970 game. He officiated in seven World Series (1946, 1950, 1951, 1954, 1958, 1962 and 1967), serving as crew chief in 1954, 1958 and 1962. He also officiated the three-game playoff series to determine the NL's regular-season champion in both 1959 and 1962 (games 2 and 3), and was crew chief for the first National League Championship Series in 1969. In a poll conducted by the players he was voted the best umpire in the National League. He refused to acknowledge the poll, saying, "What would they know about umpiring?" Before the year was out the umpires conducted their own poll and he again was voted the best. This time he acknowledged the award. Fighting for all umpires, Barlick, along with Augie Donatelli, and "Shag" Crawford, formed the first umpire's union. Known as one of the toughest umpires to ever work in the major leagues, his eyes filled with tears as he accepted his induction into the Baseball Hall of Fame in Cooperstown in 1989.

For 22 years after he retired, he acted as a consultant to the National League. He was responsible for mentoring Bruce Froemming, John McSherry, Frank Pulli, Terry Tata, Paul Runge, Ed Montague, Jim Quick, Gerald Crawford, Eric Gregg, Joe West, Randy Marsh, Charlie Williams, Steve Rippley, Bob Davidson, Tom Hallion, Greg Bonin, Larry Poncino, Mike Winters, and Ed Rapuano. Though Barlick worked for the National League, he was responsible for getting the American League to hire Drew Coble. He told the American League, "He's to good an umpire to be in the minor leagues and we don't have room for him." Barlick often told his umpires,"Though it's very bad to eject a player when he shouldn't be ejected, it's far worse to keep someone in the game who should be ejected." Barlick believed that you should help all umpires improve, no matter what level they were working... "You may have to work with 'em one day." Barlick died at age 80 in Springfield, Illinois due to cardiac arrest. His body was cremated and the ashes scattered.

Posted by Major League Umpires at 2:33 PM No comments: 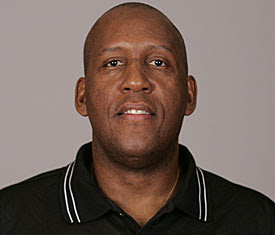 Julius Edward "Chuck" Meriwether (born June 30, 1956 in Nashville, Tennessee) is an umpire in Major League Baseball. After working in the American League from 1988 to 1999, he has umpired in both leagues since 2000. He originally wore number 32, in 2001 and 2002 he wore number 22 but in 2004 switched to number 14 after offering veteran Joe West his original number when he was rehired..

On joining the league's staff, he became only the fifth African American umpire in major league history, and the first in the AL since Emmett Ashford retired in 1970. Coincidentally, Meriwether was behind the plate when the Boston Red Sox – the last major league team to integrate its roster – won its first World Series in 86 years in 2004, and he was again behind the plate when they won the Series three years later in 2007.

Before the start of the 2010 season, fellow MLB umpire Mike Dimuro wrote on his "Umps Care Blog" that Merriweather will sit out the 2010 season on the Disabled List and then retire following the 2010 season. His son, Chris Meriwether, is a walk-on point guard for the Vanderbilt University basketball team.
Posted by Major League Umpires at 12:55 PM No comments: 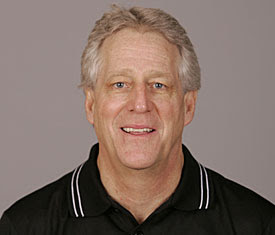 Along with Steve Palermo, Reilly was one of the first American League umpires to never use the outside chest protector. Reilly and Palermo came to the junior circuit in 1977, the year the AL mandated all new umpires on staff would have to use the inside chest protector, which had been in use in the National League for decades. Umpires on staff prior to 1977 were grandfathered and could continue to wear the outside protector.

Reilly received an associate's degree from K.C.C. Junior College in 1970. He is a member of the Board of Directors for Big Brothers/Big Sisters and works with the Food Bank South Central Michigan. He was elected to St. Philip Catholic Central Hall of Fame in 1999 and is recognized by American Amateur Baseball as a consultant. He became interested in umpiring after taking a sports officiating class in college. His proudest moment as a major league umpire was working his first World Series (1984) in his home state. He coaches basketball at St. Philip/St. Joseph in the offseason and his hobbies include hunting, fishing, golfing and following the University of Notre Dame. He is such a fan, that at the Army/Notre Dame game, he was sitting 3 rows from the top of the stadium with his wife Mary at this year's first collegiate game ever played at the new Yankee Stadium.
Reilly's wife Mary graduated from the University of Michigan and is currently an elementary teacher. Together they have four children: Katie, Ryan, Patrick and Conor. Katie attended Michigan State and now lives in Florida. Ryan attended Albion College, and played baseball for the Britons. Patrick attends Western Michigan, and Conor recently graduated from St. Philip Catholic Central, where Mike Reilly graduated in 1968.
Posted by Major League Umpires at 12:00 PM 1 comment: 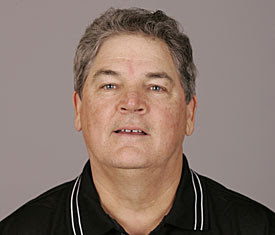 Gerald Joseph Crawford (born August 13, 1947 in Philadelphia, Pennsylvania) is an umpire for Major League Baseball. He first umpired in the National League in 1977, and since 2000 has worked in both major leagues. He has been a crew chief since 1998. He is also the brother of National Basketball Association (NBA) referee Joe Crawford and the son of former major league umpire Shag Crawford. The Crawford family was the subject of an HBO Sports Special highlighting the careers of all three.

Posted by Major League Umpires at 11:45 AM No comments: