The masks were designed for Wilson by Joe West evolved into two single (as opposed to hinged) cross bars for optimal vision. (Masks that have the bars hinged together create a blind spot on balls that are hit up or down).
Because all "wire" masks are and have been made of tubular steel Wilson had to "beef" up these cross bars and in so doing started making them of solid steel for strength. Click here to view this umpire mask and other quality umpire gear. 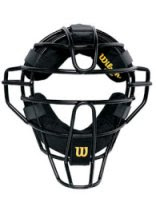 Posted by Major League Umpires at 1:09 AM No comments:

Fake umps put on show in Cincy for charity

CINCINNATI -- They received national attention for their act last year, and now Tim Williams and Joe Farrell have come out of retirement for charity and are back ringing up batters from the stands as part of the "Four Games for Bears" tour.

Williams are Farrell are best known as the "fake umpires" for dressing up in full Major League umpire outfits, sitting in the first row behind home plate and mimicking the calls of real umpires on the field. They retired the act after one year in 2009, but at the request of real umpires, they brought it back to raise money for MLB umpires' UMPS CARE Charities.

"We like to come to the game, have a few beers and have some fun, and then we met these umpires and they said, 'I think it would be cool if you could raise a little money,' and it's amazing," Farrell said. "If you can do all this, have fun and raise a little money, what the heck, you know what I mean?"

The fake umpires planned a four-game road trip, covering their own costs to games in Cincinnati, Pittsburgh, Boston and their hometown of Toronto from Thursday-Sunday. The two work in the investment business, and clients, family and friends helped them raise money for the trip. More than $7,000 was raised beforehand, all going to the Major League umpires' children's hospital program that brings Build-A-Bear Workshops to the beside of children with cancer or other serious illnesses.

In addition to the money raised, Williams and Farrell each pledged $10 to the charity for every strikeout they see in the four games.

"We enjoyed it last year, and we weren't doing it for any charity angle whatsoever," Williams said. "Now, to have the opportunity to come out and support UMPS CARE, which we've seen personally the impact it makes, it's great."

Their first appearances in Toronto in 2009, followed by trips to stadiums like Yankee Stadium, gained them national notoriety, first through blogs and then through an ESPN story. Before the game at Great American Ball Park on Thursday, Reds fans approached them and asked to pose for pictures, and Williams and Farrell happily obliged all the requests, putting their masks on and pumping their fists in strikeout motions.

The fans enjoy the act, and so do the real umpires. Williams and Farrell were invited to the umpires' charity golf tournament in Arizona in January - which they help sponsor -- and were approached to do the ballpark tour to raise money.

Although they constantly get asked when they're going to appear at a game again, they know it's not a long-term thing. But doing it for charity is a different story.

"We kind of tell them [people who ask] that it's a bit of a novelty act, it'll get old pretty fast if you're doing 20 games in the same stadium," Williams said. "But we're happy to come out of retirement for UMPS CARE."

Matt Brown is an associate reporter for MLB.com. This story was not subject to the approval of Major League Baseball or its clubs.

Posted by Major League Umpires at 1:05 AM No comments: